Or Does It? – Online Dating Safety for Beginners

Not too long ago, my dad decided to try online dating for the first time.  After being a widower for several years, we both felt it was time he socialized a bit more. He’s 76 years young and in relatively good shape. So he asked my advice about this whole ‘online dating thing’ and I tried to help him as much as I could.

1. Always meet in a public place on the first date.

2. Do not share your home/work address with anyone online.

3. Have a friend phone you while you are on your date — that way you have an out if the date is going horribly. (“sorry, my aunt just called – family emergency, have to go, nice to meet you.)

4. If it’s too good to be true…(let’s say a young hot model wants to chat with you)… it probably is.

5. Always proceed with caution — but understand there are REAL people online looking for REAL people like you… so don’t get discouraged — just get wise 😉

More about Dating and Relationships on Blifaloo.com:

He asked me how to find a good site for him and I naturally directed him to Google and just said to do some searching. “What do I search for?” he asked. I suggested a few terms, such as ‘online dating sites’, ‘senior dating sites’, and sites specifically for singles in his age group. ”Remember,” I jokingly told him,” stick to sites that have more adults than kids.”

About two weeks later I was talking to my dad on the phone and he mentioned that he was having a lot of trouble with his computer. Since I’m pretty knowledgeable about such things, I agreed to stop by his house the following weekend to take a look at the computer. I figured this would also provide a good opportunity for me to ask him how his foray into online dating was progressing.

As soon as I logged on to my dad’s computer the next weekend, I immediately got a good impression of how his foray into online dating was going –Not well. His computer was infested with spyware and X-rated pop-ups that were not only rendering his machine almost useless, they were making me quite embarrassed as I pictured my dad actually looking at these graphic pictures as I attempted to rectify his computer situation.

“What happened?” I asked him.

Embarrassed, he told me that as he started looking for online dating sites, he was having difficulty finding sites with more than a few members in his own age group. He said most of the internet personals sites he found were mainly filled with younger single, men and women.  That’s when he recalled I told him to try to find sites that have more adults than kids. I had a bad feeling I knew where this was going.

While I continued working on dad’s computer and started running an anti-virus program to see just how bad the situation was, he continued his story about his online dating endeavors and I began to see just how he had gotten himself into this mess. Since he didn’t have much success with the traditional dating sites, he recalled what I said and started searching more for ‘adult sites’ and ‘sites for adults’ presumably to find a site with more “adults than kids”, as I had instructed. “And the next thing you know, my computer is infected with all this crap…”

I continued to toil away trying to salvage dad’s computer and was surprised when he told me that even during all this, he managed to find someone online and that they were going for coffee the following evening.

I was happy, but a bit skeptical because – from the looks of his computer – he was on way too many different adult dating sites over the past two weeks and wouldn’t have had time to meet someone on a regular dating site with his computer not working too well. I thought how could he have possibly met a nice, older woman on one of these sites? I asked him a little bit more about his date the following evening and inquired as to her age. He responded that he didn’t know her exact age; after all it was ungentlemanly to ask a woman about her age, but that “she assured me that she was mature.” I groaned under my breath. My poor dad didn’t have a clue. 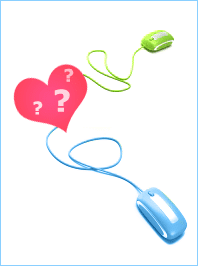 I dug a little deeper and found out that the ‘mature’ woman with whom my dad was having coffee the following evening was a dancer who just happened to travel a lot and enjoy the finer things in life. Oh boy.

“How many times did you speak to this woman, dad?”

“We emailed a few times and spoke on the phone once,” he said, albeit a little uncomfortably.  I asked him why he seemed a little uncomfortable and he blushed. “Well, she seemed a little suggestive when we spoke on the phone, but maybe that’s my imagination because I’ve been out of the dating game for so long.”  After hearing about this woman and how he found her, I didn’t think it was his imagination at all!

As I left his house that day, I wished him luck on his date the following evening, but I was pretty skeptical and a little bit worried. Nevertheless, it’s his life and he’s a grown man who can make his own decisions. As I climbed into my car for the long drive home from dad’s house, a couple thoughts popped into my head.  I wondered whether this woman would even show up for the date with my dad the following evening. I wondered what her intentions were, but most of all I wondered if Bambi would one day be my new step-mom?

There are even dating sites I bet you never knew existed….

It can be overwhelming trying to decide which site is right for you, check this sound advice about choosing an online dating site. Also see this study from the BBC about dating and personal ads – super interesting.

But the question remains, do all of these new sites and the multitude of choices make online dating better or just more confusing?