Why People Lie – What Motivates Lying? | The Psychology of Lies | Blifaloo.com

Interesting Info -> Lie Detection -> Why Do People Lie? The Psychology of Lying

Why People Lie – and The Psychology of Lying

In previous articles we have discussed various techniques for detecting lies.

But, what motivates people to lie? 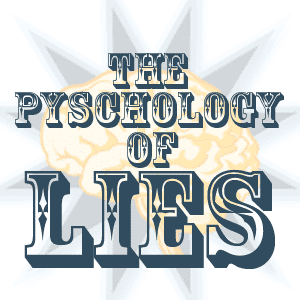 Psychologist Robert Feldman cites self-esteem as one of the biggest culprits in our lying ways: “We find that as soon as people feel that their self-esteem is threatened, they immediately begin to lie at higher levels.”

Feldman believes many lies are simply for the purpose of maintaining social contacts by avoiding insults or discord.

Small lies that avoid conflict are probably the most common sort of lie…and avoiding conflict is a top motivator for deception.

For example: someone lying about traffic holding them up, rather than sleeping in… or a “no, you look great in those pants” — both sorts of lies achieve the effect of avoiding social conflict. They are “make life easier” kinds of lies.

Back to the self-esteem angle:

The farther one’s true self is from their ideal self, the more likely they are to lie to boost themselves up, in others’ eyes or their eyes… or perhaps how they perceive others to perceive them. Hmmm… that is a hard train of thought to follow, but lying is a complex phenomenon.

How often do people lie?

One study, published in the Journal of Basic and Applied Psychology, found that 60 percent of people had lied at least once during a 10 conversation between two strangers. On average, the subjects lied almost 3 times in a 10 minute conversation.

Another study of 2000 Britons claims men tell six lies a day with women averaging 3 lies a day. The same research found the most common lie (told by both sexes) being “Nothing’s wrong, I’m fine.”

In the United States, one study had 77 college students plus 70 community members keep a diary detailing their deceptions.

The students admitted to lying an average of twice a day, while the community members lied about once per day. More statistics from this study here.

Lies We Tell Kids – “Adults lie constantly to kids. I’m not saying we should stop, but I think we should at least examine which lies we tell and why…”

Why We Lie from LiveScience – Discusses the motivation of lies with Robert Feldman – Psychologist, lying and author, along with other lying researchers.

Have a suggestion, comment or question? Please use let me know.

More on Lying and Detecting Deception:

Features here on Blifaloo. A selection of articles covering different theories of lie detection, both through body language gestures and verbal cues.

How to Detect Lies (part 1) <– Popular Learn the secrets to become a human lie detector. General overview of both verbal and non-verbal cues that signal deception. This has long been the most popular article on Blifaloo.com

Eye Movement and Lying (part 2) How to tell if someone is lying based on the movements of their eyes. Read the research behind this theory of eye direction and what it can reveal about our inner state of mind.

Statement Analysis – Intro and Resources (part 4) Introduction to the process used by investigators for analyzing a person’s words to determine if the subject is being truthful or deceptive. By guest author Mark McClish, Retired U.S. Secret Service Federal Marshall.

Statement Analysis Unique Words: “Never” (part 4b) Detecting Deception Using Statement Analysis. Mark McClish explains how the word “never” can be a signal of deception…if you know what to look (or listen) for.

Unique Words: “Actually” (part 4c) When people use the word “actually” they are comparing two thoughts. Take a look at the following article for Mark McClish’s expert take on this unique word in its relation to deception.