Are Your Wheat Pennies Worth Anything?

Go through the oodles of comments that we’ve had over the years on my rare and valuable coins article…and you’ll see tons of visitor questions such as: 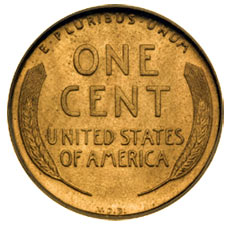 This article is for you.

Last update: April 12th, 2012. For the latest prices, check a US coin guide book. Scroll below to find our suggested coin resources.

First, a brief history of the wheat penny: This one-cent coin, produced between 1909 to 1958, is also known as the Lincoln Wheat Ear Cent, Wheat Back, Straw Penny, Wheat Head and Wheatie.

A New York sculptor, Victor David Brenner designed both sides of the coin. Brenner’s obverse (Heads) design for the coin is the longest-running design in United States Mint history – and instantly recognizable to any American.

The history behind Brenner’s iconic image is interesting – Wikipedia covers it well.

Do you have one of these rare and valuable coins? Check your piggy banks. Key years are listed with descriptions in chronological order.

Victor D. Brenner’s initials (VDB), appeared below the wheat stalks on the reverse (Tails) of the coin until public bitching led to their removal. (See the first coin pictured in this article.) In 1918, Brenner’s initials were restored to obverse — just below Lincoln’s shoulder.

Only 484,000 of the original “VDB” coins were minted in San Francisco for 1909 before the public outcry over the prominence of Brenner’s initials.

This burp in history makes the 1909-S VDB coin one of the most valuable wheat pennies. High-grade examples have been valued at over $12,000. Even coins in poor condition are worth hundreds to a $1000.

The Philadelphia mint produced close to 28 million of the 1909 VDB cents. These much more common 1909-P VDB cents are only worth about $3.

1924-D is worth anywhere from a $1 – $50, greatly dependant on condition. Un circulated examples (very rare) are worth up to a few hundred dollars.

1924-S is not very rare or worth anymore than a few cents unless the condition is un circulated. Uncirculated coins can fetch up to a few hundred dollars.

About 40 1943 copper cents are estimated to remain in existence, and only about a dozen confirmed examples.

They were most likely made by accident when copper blanks remained in the press as production began on the new steel pennies.

The easiest way to determine if your 1943 cent is copper (and valuable) is to test it with a magnet. If it sticks to the magnet, it is a steel penny, and not valuable (but still pretty nifty). More about the 1943 Copper Penny.

Also: The only known 1943 penny mistakenly struck at the Denver Mint on a bronze planchet sold for $1.7 million in September 2010.

About 24,000 1955 double die error wheat cents were put into circulation.”Double dies” are caused by a misalignment during the production of a coin. The doubling is easy to spot.

If you have a year other than the one’s listed above, your wheat penny is worth about 1 to 10 cents, unless it is in uncirculated condition. If you want to be sure, check out a coin value guide like the one featured below.

How Much is Your Coin Worth? Please see the How to Value & Sell Coins guide I put together. There are also resources to expert resources, websites, books and more there. Please do not email asking about your coin or coin collection.

I cannot give individual coin valuations — like I said, I am not an expert.

How to Value & Sell Coins Our guide to help you figure out how much your coins are worth, including common price guides, selling tips and online resources.