A visitor recently suggested adding a “fun fact of the day” to But, that would require a better knowledge of php/mysql than I have, or consistent daily updates (not gonna happen).

So, I figure this is the next best thing – a big list of trivia bits (updated casually).

Where possible, I have linked to sources if you are interested in learning more about the subject. Newest facts are added to the top of the list for return visitors.

“Did you know that giraffes have don’t have vocal chords?” – My 12 year-old informed me of this the other day (I just put her on stumbleupon and she knows how I “collect cool facts”).

I asked her if she verified the fact by checking Wikipedia or other sources. 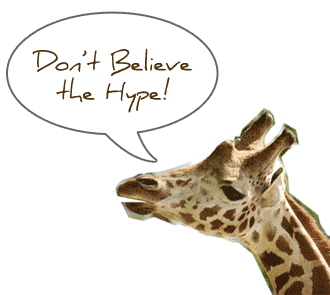 Seemed like a good mini research project to give myself. So here is what I could gather about Giraffes & Vocal Chords:

Q. Do Giraffes have vocal chords?

Long answer: “Vocal Chords” is a term referring to “Vocal Folds“. Vocal Folds are defined as: “twin infoldings of mucous membrane stretched horizontally across the larynx”.

So a better question would be: Do Giraffes have vocal folds? Again, the answer is yes.

My sources: Joy Reidenberg who dissected a giraffe wrote: “We looked at the larynx, which did have vocal folds (albeit very small ones with no sharp edges).” – search page for “vocal folds” to find her comment. Joy Reidenberg is a comparative anatomist featured in “Inside Nature’s Giants” – a British science documentary.

Wikipedia (quoting Richard Dawkins) says: “…detour of this nerve (over fifteen feet in giraffes) is cited as evidence of evolution as opposed to intelligent design…” Referring to the Recurrent laryngeal nerve.

“Although generally quiet and non-vocal, giraffes have been heard to communicate with various sounds. Courting males emit loud coughs….and communicate over long distances using infrasound….” — more on Giraffes via Wikipedia

Bananas are radioactive. They contain radioactive potassium-40. In fact, scientists use a concept called BED or Banana Equivalent Dose as a base measurement to compare other radiation sources.

Other radioactive foods include: brazil nuts, potatoes, kidney beans and sunflower seeds. High radiation foods such as bananas and brazil nuts regularly cause false alarms on radiation sensors used to detect possible illegal smuggling of nuclear material at US ports.

Morphine is rumored to have created over 500,000 addicts during the Civil War (see Google) . That is probably an exaggeration, but read this article from the straight dope about opiate use in the late 1800s and early 1900s – very interesting.

In 1897, Bayer (the maker of Aspirin), marketed the drug Heroin — mostly as cough syrup.

Heroin was created to be a less addictive form of Morphine. (didn’t work out that way, eh?) 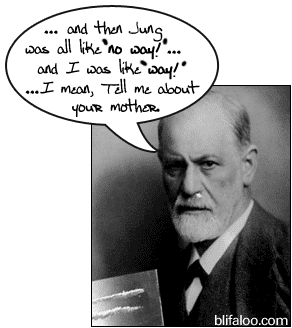 Cocaine was sold over the counter until 1914 in the United States, and was marketed in products like toothache drops and happy tonics (like Coca-Cola).

Sigmud Freud thought cocaine was great. He used it in his therapy and recommended it as a remedy for opiate addiction. See: Medicinal history of cocaine on Wikipedia.

MDMA and LSD were also used for various psychological therapies before they became illegal substances.

Ergot (a fungus & precursor to LSD) was likely — at least partially — a cause of the Salem Witch trials.

Lysol was once marketed as a douche and possibly as birth control. Crazy? Not as crazy as these old advertisements. Is your husband ignoring you? It’s ’cause your vag needs some disinfecting!

Because metal was scarce, Oscars given out during World War II were made of plaster.

The phrase ”rule of thumb” is NOT derived from an old law which stated that you couldn’t beat your wife with anything wider than your thumb.

Americans did not commonly use forks until after the Civil War.

Early Romans used to use porcupine quills as toothpicks.

The dot over the letter ”i” is called a tittle.

Antarctica is not owned by any country.

An airplane mechanic invented Slinky while he was playing with engine parts.

Canola oil is actually rapeseed oil but the name was changed for marketing reasons!

Astronauts get taller when they are in space.

Buttermilk (USA-style) does not contain any butter. Also: Buttermilk-biscuits are awesome.

Crayola is a French word that means ”Oily chalk.”

The ”vintage date” on a bottle of wine indicates the year the grapes were picked, not the year of bottling.

The first domain name ever registered was Symbolics.com on March 15, 1985.

The search engine Google got its name from the word ‘googol’, which refers to the number one with a hundred zeros after it.

China has more English speakers than the United States.

In 1980, the city of Detroit presented Saddam Hussein with a key to the city.

—> Check back soon for new facts.