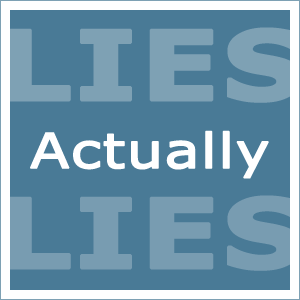 Guest author Mark McClish is a retired Deputy United States Marshal, and an expert in detecting deception with his interviewing techniques. This is the 3rd article Mark has contributed to Blifaloo.com

If you haven’t read our intro to Statement Analysis for Lie Detection, please read that first.

When analyzing a statement, there are several unique words that can provide you with additional information and show you if the subject is being deceptive. Some of these words are unique based on their definition while others are unique based on years of observations. When people use the word “actually” they are comparing two thoughts. Take a look at the following question and answer: Question:    “Did you buy a new car?” Answer:    “Actually, I bought a new truck.” In this example, it is easy to see why the subject used the word “actually.” The interviewer suggested that perhaps the subject bought a new car. The subject answered that he did not buy a new car but bought a new truck. He was comparing “car” with “truck.” When the interviewer has not proffered anything and the subject uses the word “actually” we then have some undisclosed information. I once asked a friend the following question: Question:    “What did you do over the weekend?” Answer:    “Actually, I went to a birthday party.” By using the word “actually,” my friend was comparing going to the party with something else. Since I didn’t suggest anything she may have done, this meant she was thinking about something else that she did or wanted to do. Upon hearing the word “actually,” I asked her what she wanted to do. She told me that she wanted to go shopping but then she remembered she had a birthday party to attend. Because she was thinking about going shopping, it caused her to unknowingly use the word “actually.” In Statement Analysis, the shortest sentence is the best sentence. Extra words give us extra information. “I went to a birthday party” is a good answer. “Actually, I went to a birthday party” means something else was going on. If a burglary suspect uses the word “actually” in his alibi, the police should take a closer look at him. Police:        “What did you do last night?” Suspect:    “Actually, I was at the movies.” The word “actually” tells us he probably was not at the movies but was doing something else. He knows he committed the crime but he wants to lie and say he was at the movies. Because he is thinking about these two thoughts it causes him to use the word “actually.” We find the word “actually” in a statement given by Casey Anthony who is currently on trial for the murder of her daughter Caylee. On July 15, 2008, Cindy Anthony, Casey’s mother, called 911 to report that her granddaughter, Caylee, was missing. While on the phone, the 911 operator asked to speak to Casey. 911:        “And you know who has her?” Casey:       “I know who has her. I’ve tried to contact her. I actually received a phone             call today. Now from a number that is no longer in service. I did get to speak to my daughter for about a moment; about a minute.” In stating that she talked to her daughter on the phone, Casey tells the 911 operator, “I actually received a phone call today.” By using the word “actually,” Casey is comparing receiving a phone call with what? Not receiving a phone call? There is no reason to use the word “actually” unless she is thinking about something else. She uses this word to make her statement sound believable but instead it indicates she is being deceptive. When we look at the rest of her statement we see she states she knows who has Caylee but she does not give the 911 operator the name of this person. She says that she received a phone call but does not say who called her. The number that called her is disconnected the very same day. At her trial, her attorney stated that Caylee accidentally drowned in the family pool. This means Casey was lying when she said she received a phone call in which she spoke to her daughter. Anyone who was listening to what she was saying almost three years ago would have known she was lying.    Listen for the word “actually.” Most of the time you will be able to see what the person is comparing; “Is you car blue?” “Actually, it is red.” When you cannot see the comparison, you then have some undisclosed information. You may want to find out what information the person is withholding.

The Psychology of Lies:

The Psychology of Lying – (part 5) <– Newest Why do people lie, and how often? Also touches on pathological liars along with further resources on the web and recommended books.

Comments on this page