A family member tried to convince me to sell my car to invest in the Iraqi Dinar. If I could just invest $1000… that would translate into $1,000,000 within a few weeks. The conversation went something like this: 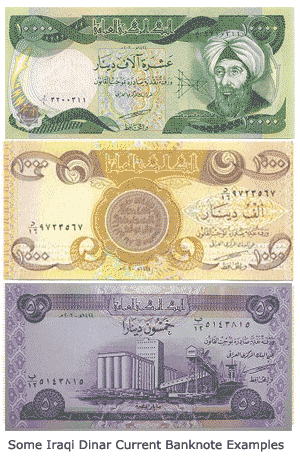 Sound too good to be true? Go ahead, look online. Iraq has announced they want to delete 3 zeros from their currency.

Revaluation is coming soon, turning all the average Joes who were smart enough to invest a grand or two into instant millionaires. Anyone who tells you not to buy dinar is because they are investors and don’t want to share the wealth!”

I can turn $1000 dollars into $1,000,000 overnight? Sounds too good to be true. To me, this Iraqi Dinar investment had all the markings of a scam. So, I started researching the topic…and this is what I found:

The new dinar was issued in October of 2003 by the Central Bank of Iraq.

The new dinar is held at a “program” exchange rate of 1170 dinars per US dollar at the Central Bank of Iraq.

The exchange rate available on the streets of Iraq is around 1200 dinars per US dollar.

Iraq has announced they want to delete 3 zeros from the currency.

Many Iraqi Dinar speculators believe this “lop” or “revaluation” will instantly give them 1000x profit on their original investment. However, most financial experts believe that Iraq will lop 3 zeros by issuing a new currency (like they did in 2003), exchanging 1000 current dinars for 1 new dinar.

Investors may see profits in the future, but a 1000x profit if very un-likely. Some financial experts believe small profits are possible, but exchange and dealer fees could eat up those profits easily.

Newest links are added to the top of the list for returning visitors, and the best articles (imo) are in bold.

Forbes Magazine on Dinar Speculation – From July 2011. Is The Iraqi Dinar Worthless Paper Or Maker Of Millionaires? Mostly opinion, and a bit about taxes for Iraqi Dinar investors.

Iraqi Dinar on Wikipedia – Read this to get your facts straight first.

Don’t fall for the Iraq Dinar Scam – From 2009. “The Iraqi dinar “investment” opportunity is a scam that has been around for a few years and has recently been regaining much of its former popularity.”

Why won’t the Dinar Scam Die? – Please read this informative article. Update 2011. “… By the time an investor finally does stumble upon a credible source, his dreams have had an awfully long time to marinate in a bad idea.”

It is possible that investors may make a profit on the Dinar; however, 1000x profits are extremely unlikely.

Investors should be very careful before buying Dinars…since international banks do not deal in the Iraqi Dinar — the market is flooded with scammers.

Anyone trying to pressure you into making this investment is a scammer, or already drank the kool-aid…proceed with caution!

I’ll try to update this page with new info, news and links as they happen.

Related Features on this Site:

Gold Investing – Bullion Coins and other options Besides info about gold investments, this article also has a section about determining the value of bullion coins.