How People’s Words Betray Them 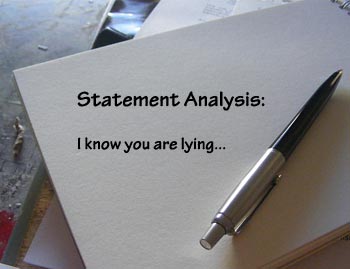 Introduction by Blifaloo: I am super excited to introduce my readers interested in lie detection to “Statement Analysis®” — a technique used by police and other investigators to determine the truthfulness of written or spoken words.

Guest author Mark McClish is a well-respected retired Deputy United States Marshal, and an expert in interviewing techniques. You’ll find more info & links about his research at the end of this article.

Statement Analysis is the process of analyzing a person’s words to determine if the subject is being truthful or deceptive. The reason these techniques work is because people’s words will betray them.

There are usually several ways you can phrase a statement. People will always word their statement based on all their knowledge. Therefore, their statement may include information they did not intend to share.

It is nearly impossible to give a lengthy deceptive statement without revealing it is a lie.    The Statement Analysis techniques are very accurate because they are based on the English language specifically word definitions and the rules of grammar. For example, when a person states, “I am trying to be honest” he is telling us he is not being honest. The word “tried” means he is only attempting to be truthful. When a rape victim uses the pronoun “we” in her statement she is revealing she is being deceptive. The pronoun “we” not only shows plurality but it also means a partnership was formed. We would not expect a rape victim to partner up with her attacker. When a person uses phrases such as “later on” or “afterwards” he has withheld some information by skipping over something in his story.

An example of utilizing the rules of grammar would be to analyze the verb tenses in a statement. When a person is telling us what happened, he is required to speak in the past tense. Therefore, if present tense language appears in his statement, this is a sign he is making up the story. Consider the following statement:

“I was sitting in my car when a man opened my door, pointed a gun at me and tells me to get out.”

Another example of using the rules of grammar to detect deception is how a person uses articles within his statement. When we introduce someone or something that is unknown, we are required to use the indefinite articles “a” or “an.” Once the introduction has been made, we then use the definite article “the.” We see this in the following statement:

“A man approached me and pointed a gun at me. He stuck the gun in my ribs and forced me into the car.”

In the first sentence, the victim properly refers to the attacker and the weapon as “a man” and “a gun.” Having identified the gun, he then correctly refers to it as “the gun” in the second sentence. A problem arises when he refers to the vehicle as “the car.” Since this is the first time he mentions the vehicle, he should have called it “a car.” Using the article “the” tells us the victim either recognized the car or he is making up the story. Many times the truth goes unnoticed because people like to interpret what a person has said. However, you should never interpret. First, one cannot read someone else’s mind. Secondly, people mean exactly what they are saying.

We see a good example of this with O.J. Simpson’s so called suicide letter. This was the letter that was discovered when Simpson failed to turn himself into the police. The letter starts out saying, “First everyone understand, I had nothing to do with Nicole’s murder.” That is how you heard it read on television. That is how you saw it printed in the newspapers and magazines. The problem is that is not what Simpson wrote. In his letter, he crossed out the words “I had.” His letter actually reads, “First everyone understand, nothing to do with Nicole’s murder.”

He took himself out of the denial.

So, why do most people include the words “I had?” Most likely because they believe this is what Simpson meant. However, people mean exactly what they say or in this case write. Simpson meant to cross out those words. By using the Statement Analysis techniques, you can determine exactly what people are telling you. This allows you to obtain additional information that sometimes goes unnoticed. These techniques will also show you if they are lying or telling the truth.

Statment Analysis Unique Words: “Never”Detecting Deception Using Statement Analysis. Mark McClish explains how the word “never” can be a signal of deception…if you know what to look (or listen) for.

Unique Words: “Actually” <– NewestWhen people use the word “actually” they are comparing two thoughts. Take a look at the following article for Mark McClish’s expert take on this unique word in its relation to deception.

What do Suspects Words Reveal? – Another good introduction to the subject of statement analysis.