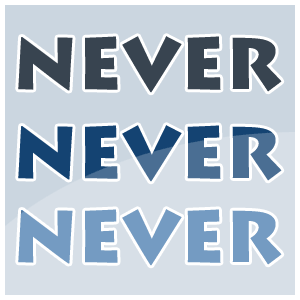 Guest author Mark McClish is a retired Deputy United States Marshal, and an expert in detecting deception with his interviewing techniques.

When analyzing a statement, there are several unique words that can provide you with additional information and show you if the subject is being deceptive. Some of these words are unique based on their definition, while others are unique based on years of observations. The word “never” is often used by deceptive people when making a denial. This is because people do not want to lie. Therefore, they will choose the easiest form of deception. It is easier for a person to be dishonest using the word “never” as opposed to directly telling a lie by saying “I didn’t do it.” For example, if a person was asked if he took the money he may state, “I would never do that.” In addition to recognizing the use the word “never,” we also see the person did not deny the action. He did not say he did not take the money. He only stated this is something he would in no way do.

The word “never” means “not ever.” If a person was asked if he “ever” cheated on his taxes, it would be appropriate for him to respond, “I have never cheated on my taxes.” The use of the word “never” would be correct since he was asked if he “ever” defrauded the government. He is replying that he has “not ever” cheated. The word “never” does not mean “no.” Therefore, you cannot substitute the word “never” for the word “no” which is something deceptive people like to do. Consider the following question and answer: Question:   “Did you sell him drugs?” Answer:     “I never sold drugs.” Because the word “never” is a negative word, it sometimes fools the interviewer into believing the subject has answered the question and denied the accusation. This question requires a “yes” or “no” answer. The subject chose to answer the question using the word “never” instead of using the word “no.” This shows us the subject is most likely being deceptive. Although he gave an answer, he did not answer the specific question. He did not state, “No, I did not sell him drugs.” We see a similar use of the word “never” with former Secretary of State Condoleezza Rice. In March of 2006, she was asked about the possibility of her running for President. Question:   “Would you consider running for President in 2008?”

Rice:  “I have never wanted to run for anything. I don’t think I even ran for class anything when I was in school.” Rice used the word “never” as a substitute for the word “no.” She is not necessarily being deceptive but is giving a good political answer. If she were to have said “no,” that would probably end any Presidential dreams she may have had. If she would have answered the question with a “yes,” that would have caused a firestorm amongst the press. So, she chose to remain in the middle of the road. She gave an answer that sounded like she was saying “no” but in reality she did not say “no.” Her answer tells us that part of her wanted to run for President. John Connolly is a former FBI agent who in the 1970s developed Boston Irish mobster James “Whitey” Bulger into an informant. Bulger was a valuable asset in helping the FBI dismantle the Italian Mafia in the Boston area. Connolly retired from the FBI in 1990. With Connolly gone, the FBI stopped using Bulger as an informant and instead turned their attention to his illegal activities. Their investigation uncovered that over the years Connolly had accepted bribes from Bulger and falsified reports about Bulger. In 1999, Connolly was indicted on these charges. That same year, Dateline NBC profiled John Connolly’s case. Correspondent Dennis Murphy asked Connolly the following questions: Murphy:      “Did you go too far over the line?” Connolly:    “Anyone in my business, that knows what they’re doing, knows enough to walk up to that line but to never step over it.”

Murphy:      “And you didn’t?” Connolly:    “I never stepped over that line.” In the first answer, Connolly states that “anyone” in his business knows not to cross that line. The problem is he did not tell us that he did not cross that line. In his second answer, Connolly clearly uses the word “never” as a substitute for the word “no.” In 2002, Connolly was convicted of racketeering, obstruction of justice and lying to an FBI agent. He was sentenced to 10 years in prison. The use of the word “never” does not automatically mean a person is being deceptive. There are correct ways one can use the word. For example, I can state, “I have never been skydiving” because it is a truthful statement. However, if a person uses the word “never” as a substitute for the word “no,” it is a strong indication the person is withholding information and possibly being deceptive.

What do Suspects Words Reveal? – Another good introduction to the subject of statement analysis.