Magic and Mentalism: The peception of your persona – by Mark Reed – Blifaloo.com

The perception of your persona

by Mark Reed aka Marc Mayhem 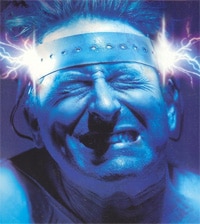 A few weeks ago, some fellow performers and I were discussing the effect “Tossed Out Deck”.  That discussion led into more generalized talk about effects such as book tests, predictions, and other mental style routines.

When it comes to effects demonstrating the powers of the mind, there are generally two types of performers – magicians and mentalists.  Yes there are other styles such as spiritualists, mediums, paranormalists, ect… but most of those are off shoots of either magician or mentalist in some fashion or another.

A magician entertains with a showing of skill, trickery, and misdirection.

A mentalist entertains with a showing of mental prowess and claims of unusual abilities.

There is a very clear difference between the two – even to the point of somewhat of a social class-like separation within the performing community.  Magicians tend to stick with other magicians and mentalists tend to keep to other mental style performers.

Here in lies a conflict of performing in many cases. When most magicians perform a mentalism effect, it often tends to be lightly scripted and layered into the act.  This is due to having to frame the effect within other effects that are not mentalism type effects. There is no building blocks of commonality across the performance. It lacks REASONS for doing something.  Most of the time it is framed within a mind set of “Let me show you another trick”.

For example, a magician performs the sawing lady in half, then a zig zag effect… they now perform a book test and read the mind of a spectator. Where is the connection across the three effects? Where is the building of demonstrations of power and prowess? Rather than the audience experiencing the paranormal, or the bizarre – they are viewing the show as a demonstration of trickery. When you accept something is a trick, you immediately validate it as fake.

Now take for example a mentalist. He comes on stage and performs a prediction box effect. Discusses paranormal powers or hidden powers of the mind. He does a metal bend effect. Again discusses how the mind can accomplish feats when the mind is opened in certain ways. A book test at the end, showing the ability to see and receive the thoughts of others. Each effect has a commonality in it – mind powers. There were no effects that were blatant “tricks” such as the zig zag. The patter and scripting is connected to reinforce the rare powers the performer has or is experiencing. The audience is left in a mental framework that has them questioning the reality of what they saw. There were no flashy illusions. There were no rabbits or typical “I will fool you” effects. There was a clear cut demonstration of something not normal. That doubt or wonder is what adds so much more power to mental effects done by mentalists vs magicians.

I’m not saying a magician can just grab a prop and entertain, certainly not, but I think mentalists take character development to an entirely new and higher level. Magicians are wonderful performers. They often become someone on stage – someone of skill and deception. However, I think even past being an actor – Mentalists tend almost truly become the mentalist/paranormalist character they deliver on stage.  They live the life “As if” they truly can perform such feats.

Max Maven illustrated this concept of though when during an interview was asked:

INTERVIEWER: “A lot of people who have seen your show, come out thinking that what you do is real, that you could read minds, so how do you respond to that?” MAX MAVEN: Your question presumes that I can’t.

This article is not meant to bash magicians and praise mentalists. Not at all. It is meant to illustrate the opportunity magicians have to take their performances to the next level of strength. Go past the ordinary performance of a Zig Zag. Give your show reason and create doubt that what the audience is seeing might truly well be happening. Create that doubt.

When you perform mental style effects, what is your audience seeing? Are they seeing a magician performing feats of skill and deception, leaving them validating the effect as a trick? Or are they seeing someone experiencing something unusual, and leaving doubt as if what really happened?  What perception do you think has the most impact on a spectator?

Mentalists – are you using this opportunity for doubt to the fullest potential? Are your audiences seeing what might be miracles, or are they seeing tricks and deception?

As I said in the beginning of this article, sometimes I may just rant. I will close this rant with saying that perception is that people accept as truth. If someone perceives you have powers – to them, you really do. So whether you are doing a Zig Zag, sawing a lady in half, reading minds, or floating a zombie ball, do it “AS IF” you are really doing it. Become someone that really can float a metal orb. Be someone that really can saw someone in half and have them reassemble and live. It will add so much more to the strength of your performances.

By Mark Reed aka Marc Mayhem Be sure to check out his website: MagicVault.net and his Online Magic Shop.