Have You Solved It Yet?

The year was 1977. There were still a lot of Volkswagen Beatles and Chevy Malibus on the streets. The price of gas was about to explode but you could still fuel the car for under a dollar.

Punk and new wave fashions were just entering the scene, but most people were still wearing relaxed bell bottom hippie fashions. Disco, soft folk rock, heavy rock, and early punk were the most likely choices on the radio. The digital revolution had started and people were buying their first home computers.

And then there was the cube, Rubik’s cube. It was a fad that would soon eclipse the popularity of the Pet Rock. There was always one guy in geometry class who could whiz through the thing in no time. But for everyone else it was pure frustration. It didn’t take long to disassemble the cube or peel and move the stickers (Rubik’s actually sold packages of stickers for those who wanted to solve the puzzle this way.)

It’s probably no big ego booster to know then that a four year old has just deciphered the 3×3 Rubik’s cube in one minute and 28 seconds.

It was at the World Championship Rubik’s competition in Budapest, Hungary over the weekend of October 5th, 6th, and 7th. The competition brings the cube back to its home where it was created 30 years ago by Erno Rubik. Just like that kid in geometry class, he was passionate about the subject. Not satisfied with working problems out on paper, he brought them into 3d form.

The cube didn’t make it from Hungary to shores of North America until 1980, but once it got there its popularity exploded. That brings us to 2007 and a championship competition drawing participants from places as diverse as France, America, Korea, the United Kingdom, France, Japan, Canada, Hungary, the Netherlands, Poland, etc.

That four year old is not alone. There was also a six year old who solved the 3×3 cube in just under 42 seconds. A blindfolded twelve year old solved the 3×3 cube in just under two minutes and 42 seconds. Don’t think this was a competition just for children. The oldest participant was 78 and solved the 3×3 in just under 2 minutes and 57 seconds. One of the competitions had the participants showing off by solving the cube with one hand. You can see all of the contests stats at the World Cube Association’s site. There are several products now produced by Rubik’s including 2×2, 4×4, 5×5, and picture cubes. The hottest Rubik’s game on the market is an electronic cube with light and sound effects. 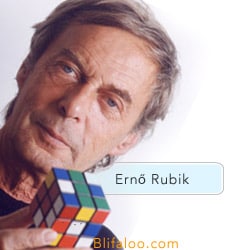 So you’re chomping at the bit now, right? Maybe you just didn’t try hard enough on your last attempt at the cube. Don’t worry, there’s plenty of solution help to be had out there.

Rubik’s official site provides solutions and links to recognized sites for all of there products. Visit Rubiks.com.

Or maybe you prefer to curl up with a good book on the subject. In 1981, Patrick Bossert, a twelve-year-old schoolboy from England, published his own solution in a book called “You Can Do the Cube.” It sold extremely well. The most popular method was developed by David Singmaster in his book “Notes on Rubik’s Magic Cube.” There is also James Nourse’s “The Simple Solution to Rubik’s Cube.” Go ahead and give it another try. It’ll be worth it even if just for the nostalgia.

Don’t forget the package of stickers just in case.

Lloyd Allison used Rubik’s Snakes to digitally model protein folding. He writes: “The snake can be packed in a ball as a “globular” protein and can form “helices” and “extended” conformations.”

In 1994, Melinda Green, Don Hatch, and Jay Berkenilt created a model of a 3×3×3×3 four-dimensional version of a Rubik’s Cube called the MagicCube4D. Having more possible configurations than there are atoms in the known universe, only 55 people have solved it as of January 2007.